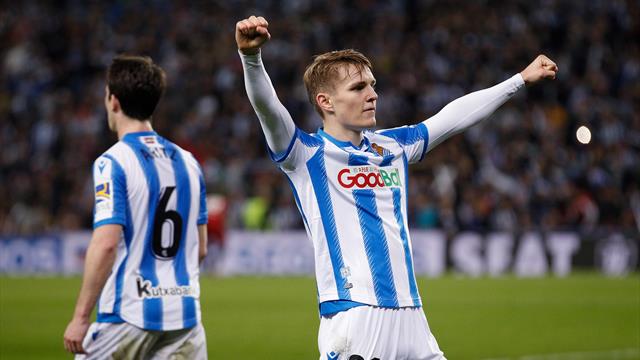 Real Sociedad are on track to reach the Copa del Rey final for the first time in 32 years after beating second division Mirandes 2-1 at home in Thursday's semi-final first leg.

Spain international Mikel Oyarzabal fired the home side into the lead in the ninth minute but Mirandes, who have knocked out three La Liga sides on their way to the last four, levelled in the 40th through Brazilian forward Matheus Rodrigues.

Sociedad's Norway midfielder Martin Odegaard lost the ball in the build-up to the equaliser but redeemed himself three minutes later by netting on the rebound to restore the lead.

The Basque side had more chances after the break but were kept at bay by keeper Limones, who gave the minnows hope for the second leg next month at their tiny Estadio Municipal de Anduva where they have beaten Celta Vigo, Sevilla and Villarreal this season.

On the same topic